When I read this post, I was looking forward to compile this kernel and look at the new Tuz logo. Finally as part of my System Security course project, today I compiled the vanilla kernel (v2.6.29) and booted the machine to look at this little Tasmanian devil.

Good that the kernel community is taking part in these kind of activities!
Posted by Arun Ponniah Sethuramalingam 3 comments: 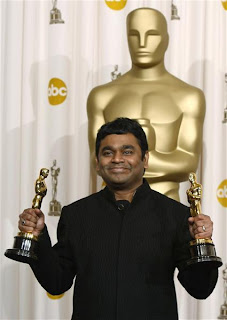 A.R.Rahman bags two academy awards (Oscars) in style, one of the Original Score and another for the Original Song, both for the movie Slumdog Millionaire.

As he said, 'Before coming here, I was excited and terrified ... '. This should have been the feeling for each and every Rahman fan who have grown up hearing his music and have seen him gradually rise with only his talent and dedication.

You have the made the impossible possible!
Posted by Arun Ponniah Sethuramalingam No comments:

AR Rahman gets the Best Original Music Score award at 2009 Golden Globe awards. A day to be etched in the Indian film/music history. AR Rahman has truly taken India to the Hollywood!

Let him also bag the Oscars, for his inherent music talent.
Posted by Arun Ponniah Sethuramalingam No comments:

I'm looking forward to see this movie. Seems like a lot of hard work has been put into create this movie. Best wishes to the whole Vaaranam Aayiram team!

I got a new laptop (Thinkpad T400) recently. Lenovo forces all the T400 buyers to choose Vista by default. As far as I know, there used to be an option to choose GNU/Linux operating system with T61 models. I don't know why Lenovo has revoked those options with the T400 model. As I plan to use my T400 was development purpose as well, I want to install a GNU/Linux operating system and my option is Ubuntu, for its behavior in seamlessly detecting all devices.

To my surprise, when I booted the Ubuntu Hardy Heron I noticed that my wireless card wasn't detected out of box. When I googled for it, I found out that to be a know problem with all the Atheros wireless cards. The wireless card that I have in my laptop is:

To get that working follow the steps given in the reply #6 (by the user reasoner) in the thread http://ubuntuforums.org/showthread.php?t=902860. It worked perfectly fine in my case.

Before I landed on the above menitoned link, I tried with the latest madwifi source from its subversion trunk and that didnt workout for me. *May be* the code under the subversion branch '../branches/madwifi-hal-0.10.5.6/' made the difference.
Posted by Arun Ponniah Sethuramalingam 11 comments:

Heading towards another manoeuvre in my life

Its been an year wait for this, actually more than an year now. An year ago I felt like I should be taking up my masters program. There has been multiple reasons that urged me to take this decision. I felt it was a very hard decision, but for some reason I wanted to do that.

I remember the day I started to the read the book, Word Power Made Easy (WPME) by Norman Lewis. It was interesting and a great learning experience for me. Consciously I have never tried to improve by word power, being a guy who inhibits the habit of reading, you know the situation. But after few days of reading the book WPME, it was some kind of satisfaction that drove me to complete the book. Following that I started to read Barrons making my mind that I should give GRE in few months. That too happened, but completing Barrons was a real strenuous effort. I never thought I could do that! Following that was TOEFL, which didnt require much effort from my side.

The next big and demanding task was the application process. From the copious number of available universities, I had to narrow down to the ones I really would love to go. It required a lot of back and forth conversation with my friends and relatives. Another long and demanding period of time was the application phase, where I had to prepare documents required by these universities, couriering them, following it up, waiting for the results, etc. It didn't even stop after the results were out. To my luck, I (and all my univ mates) had to wait a long time to get hold of my I20. Once the I20 was in, it was a very quick week for me, I got my Visa stamped before I could realize that it happened.

Another surprise to me was that, by the last Monday (14th July) I had completed 3 years of my stint at Trilogy (and thus in the industry). I know this is a little late, I should have gone for my masters an year ago, but it is good that I atleast decided to take that up now, rather than never.

And FYI, I'm heading to the State University of New York at Stony Brook for my MS in Computer Science starting this Fall (September 2008) semester!
Posted by Arun Ponniah Sethuramalingam 9 comments:

IPL is the buzz these days. It may be because of the money that has been poured in, or the 100% guaranteed entertainment. At least I enjoy watching these games for the guaranteed fun.

I'm in Bangalore for the past 2.5 years and I haven't used this opportunity to watch a live match in the stadium. But I didn't want to miss this anymore. Since IPL T20 being a sure entertainer we set out to watch one. Being a native a Tamil Nadu, the obvious choice would be to watch the match between Chennai (Super Kings) and Bangalore (Royal Challengers).

Watching a match in the stadium is much more different than watching it on a Television. The lively, energetic and sometimes boisterous crowd is one of the cogent reasons to witness a match in the stadium. Sometimes you ignore the actual match to get involved in some activities that happens in the stadium stands like the Mexican wave, etc.,That too in our case, the clash was between Chennai and Bangalore (the so called deadly-rivals in the water dispute) and with equal number of supporters for both the squads added the fun factor. During the final overs of the Bangalore innings, when they were loosing wickets in haste, the tamil crowd acclaimed Super Kings with slogans, which remained me of my college days.

Though Bangalore gave a big fight, they were unfortunate to lose the game. We witnessed great batting skills from MS Dhoni, Ross Taylor and Wasim Jaffer and an awesome bowling spell from Dale Steyn, though he stumbled in his last over with Dhoni. We were able to see players Kallis, Murali, Ntini and Hussey and drummer Sivamani in a very close proximity. To recapitulate, it is a great fun to watch a match in the stadium.
Posted by Arun Ponniah Sethuramalingam 3 comments:

Arun Ponniah Sethuramalingam
I hail from Madurai, a beautiful 'temple' city located in the southern part of India. I attempt to write on substances that I'm currently mulling over in my head.

This is a Flickr badge showing public photos and videos from Arun Ponniah S. Make your own badge here.